Later as an Army Soldier – From the shores of Italy to the plains of Missouri to the mountains of Kentucky, North Dakota and Germany

To the jungle and rice paddies of Vietnam where he received a shiny bronze star for his heroic efforts in saving his friend Col. Beatty after their helicopter crashed. And still he stood strong

Although it would be a few years later and my Nan twisting my Uncle Jack’s arm to find out where my Pap was, they would met again and 4 kids later

Almost 50 years has passed since they moved back to Pennsylvania, 5 grandkids and 5 great grandkids have been added to his crew

As he battled the cancer, he never really complained. Even when you knew he didn’t feel well and was in pain. Until the very end

I still have everything you gave me Pap – Courage, Hard Work, Doing What’s Right, my Hard Head (well I get that from my Nan too), my long toes and my bad veins. But most importantly, you taught me to drive.

Before I could barely reach the pedals he would let me steer that old white Chevy truck. We would fly over the mountain. Later when I could touch the pedals I took out part of my Aunt Carrie’s chicken coop but Shoopy fixed it up good as new.

Next we had a red Ford F150. We would soar over the hills every Sunday from church to the restaurant on Lincoln Way with the big rooster out front. Shoopy and I would laugh and I would yell for him to go faster. Poor Nan always had a death grip on the door yelling, “Ken! Slow down!” She was usually half sick before we got to the restaurant.

Sometimes after lunch we would go for groceries. We would use the grocery carts to do wheelies and 180’s. Nan refused to go to t he grocery store with us after we “tapped” the dog food display one Sunday.

I needed to learn to drive a stick. By then Shoopy had a little red Chevy S10. I learned to drive my first time out. After a few smacks across the head and a few “Dang it girl give it some gas, let up on the clutch!” I got the hang of it.

Everyone knows Shoopy went through a lot of trucks but those 3 trucks and the grocery carts are always the ones I remember.

We always joked that we should open a driving school since the rest of you don’t know how to drive.

Thank you for all you have taught me Shoopy and the love you gave me and for always standing strong.

My cousin Auri posted this poem:

I will see you again

This is not the end
I will carry you with me

Until I see you again Shoopy never said “I Love You” much, but you always knew he did. I am not sure why but a few years ago we started ending all of our visits and phone conversations with “Watch the Ice, Talk with ya later!”

So Watch the Ice Shoopy and I’ll Talk with ya later.

Find Us On Social Media 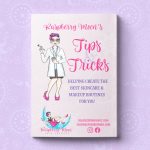 Sign up for our monthly email newsletter to receive our 8 page Tips & Tricks booklet free!